From the intersection of highway 12 and glenfield road, drive .2 Miles east on glenfield road. You will come to an intersection of main street. Turn left onto main street and drive .2 Miles to a right onto grieg road. Drive .5 Miles on grieg road to a left onto otter creek road. Drive 1.5 Miles on otter creek road to the intersection of pine grove road. Turn left here onto pine grove road and drive 1.4 Miles. Where rudd road is on your right. Turn onto rudd road and drive .3 Miles to the end where the bridge is out. This is the take out spot for the whitewater rafters.

The trail is fairly easy and is .5 mile round trip on the west side trail. The falls below the bridge is only a few hundred yards and also can be viewed from the bridge. 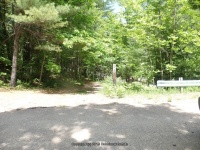 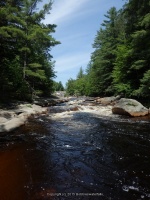 I believe by the photos, that the Bridge Boof IV Rapids may also be the same as Hidden Falls

INDEPENDENCE RIVER, ON THE BRIDGE 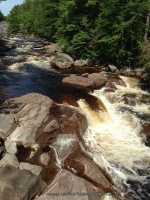 The Wall IV Rapids and the Independence river (falls on) are located downstream from the bridge. I firmly believe I had viewed the latter from the other road, as can see by the tracking.

THE WALL IV-RAPIDS on INDEPENDENCE RIVER 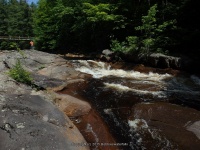 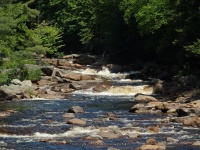 This section are the photos I had taken when we took the trail on the west side of the river, going as far as we could just below the dam. Another trip is planned to this location taken the trail on the east side to go further upstream for the other falls listed here.

INDEPENDENCE RIVER, ALONG WEST SIDE TRAIL 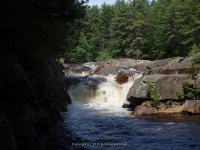